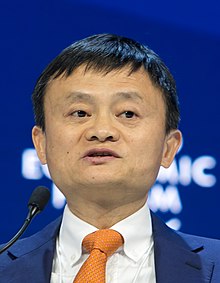 Jack Ma Yun (born 10 September 1964) is a Chinese business magnate, investor and philanthropist. He is the co-founder and former executive chairman of Alibaba Group, a multinational technology conglomerate. In addition, he co-founded Yunfeng Capital, a private equity firm. Ma is a strong proponent of an open and market-driven economy.

In August 2014, according to the Bloomberg Billionaires Index, Jack Ma had a net worth of US$21.8 billion, making him the richest man in China. In 2017, Ma was ranked second in the annual “World’s 50 Greatest Leaders” list by Fortune. He has widely been considered as an informal global ambassador for Chinese business, and is an influential figure for the community of startup businesses. In September 2018, he announced that he would retire from Alibaba and pursue educational work, philanthropy, and environmental causes; the following year, Daniel Zhang succeeded him as executive chairman.

As of March 2022, with a net worth of $37.1 billion, Ma is the fifth-wealthiest person in China (after Zhong Shanshan, Ma Huateng, Zeng Yuqun and Zhang Yiming), as well as one of the wealthiest people in the world, ranked 35th by Bloomberg Billionaires Index.[2] In 2019, Forbes named Ma in its list of “Asia’s 2019 Heroes of Philanthropy” for his work supporting underprivileged communities in China, Africa, Australia, and the Middle East. In April 2021, Jack Ma ranked 26th in the “2021 Forbes Global Rich List” with a fortune of US$48.4 billion.

Ma has reportedly been seen in public only twice since October 2020, fostering speculation regarding his whereabouts

Must watch Video of Jack Ma

How to become rich

How I overcame failure